The 25th season of The Bachelor premiered on January 4, 2021. It featured 28-year-old Matt James, a real estate broker and entrepreneur.

He was originally supposed to appear on the 16th season of The Bachelorette.

He ultimately chose to pursue a relationship with Rachael Kirkconnell.

The official poster was released on December 7, 2020.

As with the 16th season of The Bachelorette, the season was filmed entirely at the Nemacolin Woodlands Resort in Farmington, Pennsylvania, 60 miles southeast of Pittsburgh due to quarantine safety protocols.

On October 5, 2020, 43 possible contestants were announced on the official Bachelor Facebook page. In an official release posted on December 7, 2020, it was revealed that only 32 women would take part in the show. This is the highest amount of women to appear on the show. The release also revealed that eight women will be sent home during the first rose ceremony. On December 11, 2020, the final cast of 32 women was revealed.

A notable contestant is Mariela "Mari" Pepin, who had previously been crowned Miss Maryland USA 2019. Pepin later went on to place within the top ten at Miss USA 2019, where she competed against season 24 contestants Victoria Paul and Alayah Benavidez. Another contestant is Kit Keenan, who is the daughter of fashion designer Cynthia Rowley.

The season began with 32 contestants.

Katie Thurston was announced as the next bachelorette on the After The Final Rose special. Her season will air in May 2021.

Michelle Young was also announced as the bachelorette on the After The Final Rose special. Her season will air in Fall 2021.

Matt James and Rachael Kirkconnell ended their relationship after photos of Rachael attending an Antebellum themed party resurfaced, but quickly got back together. They are still together.

Michelle Young got engaged to Nayte Olukoya on the 18th season of The Bachelorette. They are still together.

Serena Pitt got engaged to Joe Amabile on the 7th season of Bachelor in Paradise. They are still together.

Abigail Heringer is dating Noah Erb, whom she met on the 7th season of Bachelor in Paradise.

Katie Thurston got engaged to Blake Moynes on the 17th season of The Bachelorette. They broke up in October 2021 and she is now dating John Hersey who was a contestant on her season.

Mari Pepin got engaged to Kenny Braasch on the 7th season of Bachelor in Paradise. They are still together. 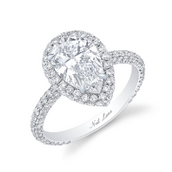 A 3-carat, pear-shaped diamond that is intricately set with a diamond halo and a platinum band set with over 175 brilliant-cut round diamonds by Neil Lane.

1/38
Community content is available under CC-BY-SA unless otherwise noted.
Advertisement