Yes
The 12th season of The Bachelorette premiered on May 23, 2016. The season featured 25-year-old Joelle "JoJo" Fletcher, a real-estate developer.

The season re-aired in a shortened version on June 29, 2020, as a part of The Bachelor: The Greatest Seasons - Ever!.

She first appeared on the 20th season of The Bachelor, where she was rejected by Ben Higgins.

She ultimately chose Jordan Rodgers and accepted his proposal.

Filming commenced on March 16, 2016 shortly after the 20th season of The Bachelor.

Destinations including Pittsburgh in Pennsylvania, Uruguay and Argentina with appearances from Dan + Shay, All-4-One, Max Kellerman and Marcellus Wiley.

Casting began during the 11th season of The Bachelorette. Days before the official announcement, Fletcher's fellow The Bachelor season 20 contestant and second runner-up Caila Quinn was originally selected to be in the lead role, but she was dropped at the last minute for Fletcher by the producers.

The season began with 26 contestants.

Christian Bishop, Chad Johnson, Daniel Maguire, Evan Bass, Grant Kemp, Vinny Venteria, and Wells Adams were all chosen for the 3rd season of Bachelor in Paradise. Chad Johnson was removed from the show by Chris Harrison in episode 1 and placed 30th.

Derek Peth and Chase McNary will return to compete in the 6th season of Bachelor in Paradise.

Evan Bass is now married to Carly Waddell whom he met on the third season of Bachelor in Paradise. On August 7, 2017, they announced that they are expecting their first child. Their daughter, Isabella Evelyn "Bella" Bass, was born on February 15, 2018. On May 9, 2019,they announced via Instagram they are expecting their second child. Their son, Charles Wolfe "Charlie", was born on November 12, 2019. 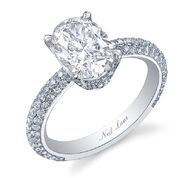 The Neil Lane ring features an oval-cut center stone and pavé diamonds along the band. According a source, the ring costs about $85,000.

1/8
Community content is available under CC-BY-SA unless otherwise noted.
Advertisement