View source
watch 02:56
Doctor Strange in The Multiverse o Madness - The Loop
Do you like this video?
Play Sound

Yes
The 14th season of The Bachelorette premiered on May 28, 2018. The season featured 28-year-old Becca Kufrin, a publicist.

She first appeared on the 22nd season of The Bachelor, where she got engaged to Arie Luyendyk Jr..

She ultimately chose Garrett Yrigoyen and accepted his proposal.

Arie broke off his engagement to Becca shortly after filming had wrapped. He went on to get engaged to the runner-up, Lauren Burnham.

Becca was announced as the new Bachelorette on the After the Final Rose show.

On May 22, 2018, Chris Harrison teased that Becca is happily engaged.

Virginia governor Ralph Northam also made his appearance as the audience member in the group date held in Richmond, Virginia.

Becca got to meet five of the men, at the After the Final Rose show.

The show came under fire when it was revealed that Garrett Yrigoyen, who was the recipient of the "First Impression" rose, had liked offensive posts on Instagram that mocked the trans community, immigrants, and liberal women, along with one post that referred to a survivor of the Stoneman Douglas High School shooting as a crisis actor. He later apologized on Instagram for the hurt and offense that liking the posts may have caused and stated that he will be more mindful of what he likes in the future as those likes "were not a true reflection of [him] or [his morals]".

On June 13, 2018, the show came under more fire for allowing contestant Lincoln Adim to be on the show after he had been charged with groping and assaulting a female on a harbor cruise ship on May 30, 2016. He was convicted of this crime after he had finished filming and one week before the season premiered. He will have to register as a sex-offender. Warner Bros., who produces the show, claims that he lied about facing sexual misconduct charges and that they use a third-party company to do background checks, claiming:

"The report we received did not reference any incident or charge relating to the recent conviction ― or any other charges relating to sexual misconduct. We are currently investigating why the report did not contain this information, which we will share when we have it."

The season began with 28 contestants.

In June 2020, Becca revealed that she didn't know where they stood in their relationship. They had a falling out when Garrett showed support for police officers during the case of George Floyd and the Black Lives Matter movement. They announced their split on September 1, 2020.

Blake landed himself in hot water during his appearance on the 6th season of Bachelor in Paradise, when it was revealed that he had hooked up with both Kristina Schulman and Caelynn Miller-Keyes at the 2019 Stagecoach Festival.

Colton was in a relationship with Cassie Randolph. They announced their split on May 29, 2020.

Chris was married to Krystal Nielson whom he met on the 5th season of Bachelor in Paradise. On February 14, 2020, they announced that they had mutually decided to separate.

Jordan was engaged to Jenna Cooper whom he met on the 5th season of Bachelor in Paradise. They ended their relationship when Jordan discovered that Jenna was texting another man.

Joe was in a relationship with Kendall Long whom he met on the 5th season of Bachelor in Paradise. On January 29, 2020, the couple announced that they are no longer together. 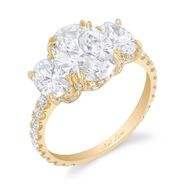 1/29
Community content is available under CC-BY-SA unless otherwise noted.
Advertisement