Yes
The 8th season of The Bachelorette premiered on May 14, 2012. The season featured 26-year-old Emily Maynard, a children's hospital event planner.

Maynard was chosen by Brad Womack in the 15th season of The Bachelor, but they split after the show.

Maynard is the second former Bachelor winner to star in The Bachelorette since Jennifer Schefft in the 3rd season.

She ultimately chose Jef Holm and accepted his proposal.

Emily is the second former Bachelor winner to star in The Bachelorette and she is one of the three Bachelor winners chosen in the lead of the series. Jennifer Schefft of the 3rd season was the first (and subsequently Becca Kufrin in the 14th season six years later).

The season was filmed in Maynard's hometown of Charlotte, North Carolina, where she and her daughter Ricki Hendrick live (along with the child's paternal grandfather; the child's father died before she was born), rather than Los Angeles, marking this as the first time a show in The Bachelor franchise has taken place in the Southern United States and also the second time one has been filmed on the East Coast since New York City in season three.

NOTES
†Michael died on May 29, 2017, caused by an accidental multiple drug toxicity.

Third place finalist Sean Lowe was chosen as the bachelor for the 17th season of The Bachelor, over runner-up Arie Luyendyk Jr. and The Bachelorette season 6 winner Roberto Martinez.

Bukowski crashed the 10th season of The Bachelorette on night one, but bachelorette Andi Dorfman decided she didn't want to meet him.

Bukowski and McMahon then returned on the 1st season of Bachelor in Paradise. Bukowski quit in 20th/21st, while McMahon was eliminated in 17th/18th.

Bukowski returned yet again for the fourth time on the 2nd season of Bachelor in Paradise but quit the same week he came to paradise in 22nd place. He then announced that he would retire from the bachelor franchise and this would be his last appearance.

In September 2017, Arie Luyendyk Jr. was chosen as the bachelor for the show's 22nd season.

Bukowski returned yet again for the fifth time on the 6th season of Bachelor in Paradise.

She ultimately chose Jef Holm and accepted his proposal. Maynard and Holm ended their relationship in October 2012.

Jef is currently in a relationship with Francesca Farago from Too Hot to Handle.

Sean Lowe is married to Catherine whom he met on his season of The Bachelor. On December 8, 2015, the Lowe's announced via Instagram that they are expecting their first child. On July 2, 2016, they couple welcomed their son, Samuel Thomas. On November 3, 2017, they announced that they are expecting their second child. Their second son, Isaiah Hendrix, was born on May 18, 2018. Their third child daughter, Mia Mejia, was born on December 23, 2019.

On September 7, 2017, Arie Luyendyk Jr. was announced as the Bachelor for the 22nd season of The Bachelor. His season began on January 1, 2018. He proposed to Becca Kufrin, but broke off the engagement in order to propose to runner-up Lauren Burnham. On November 14, 2018, they announced that they were expecting their first child. On January 5, 2019, they announced that they are expecting a girl. On May 29, 2019, they welcomed their daughter, Alessi Ren. They were married on January 12, 2019. In April 2020, they found out that they were expecting their second child. Unfortunately the pregnancy ended in a miscarriage. 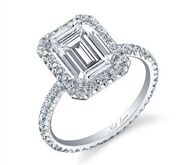 Emily said yes to Jef Holm - and a Neil Lane engagement ring, this one featuring an emerald-cut center stone.
Community content is available under CC-BY-SA unless otherwise noted.
Advertisement